Fixing JNI Thread Leak in Ignite.NET, or How to Get a Thread Exit Callback in C#

Ignite.NET runs in-process JVM (in thick mode) and interacts with it using JNI. Since version 2.4, when Ignite.NET became cross-platform, we had a stealthy and mysterious bug: JVM thread count kept growing, consuming memory, even though actual OS thread count for the process was low.

The reproducer from one of our users boiled down to this: 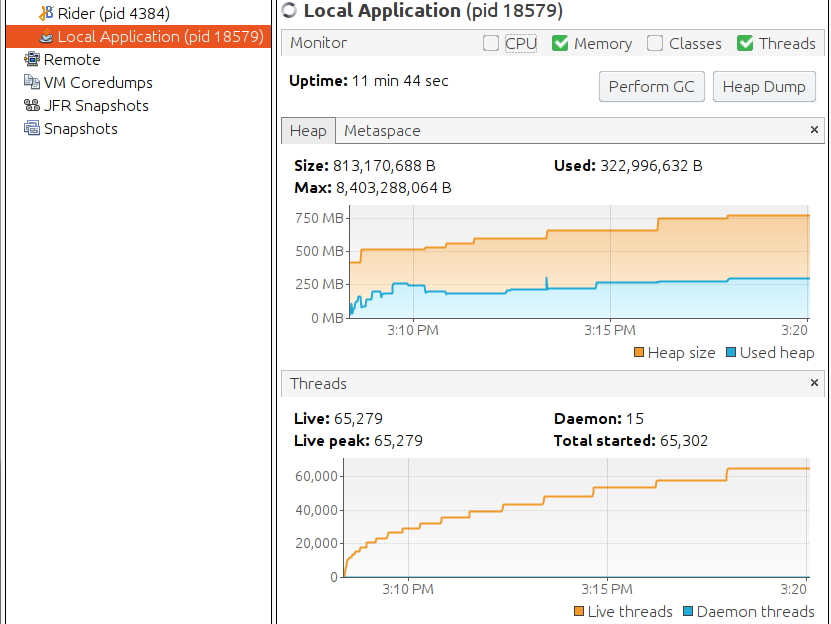 Memory consumption is not that bad here, but creating new threads becomes slower and slower: here we see 65K threads created in 11 minutes, while after the bugfix the same program can start/stop 65K threads in 30 seconds.

Java uses native threads, there is no green thread magic here. So what is going on? How is that possible?

Note that manual thread management is a rarity in modern .NET, most people use ThreadPool directly or via Task APIs, which makes this bug stealthy - threads rarely start and stop. So this issue took a while to surface.

As mentioned above, Ignite.NET interacts with in-process JVM via JNI. The basic procedure looks like this:

However, this only works in one thread, quote:

Already see where this is going?

Ignite starts the JVM once, and almost all APIs are thread-safe. You can (and should) use one Ignite instance from many threads. So, under the covers, Ignite calls AttachCurrentThread whenever a Java call is involved. But we don’t call DetachCurrentThread right away, for performance reasons.

Attach/Detach call pair takes around 50μs (microseconds) on my machine. This may not seem like much, but it is actually very significant. One of our standard ICache.Get benchmarks shows 160K op/s without DetachCurrentThread, and only 16K op/s with DetachCurrentThread - 10 times slower.

This was forgotten during the migration to cross-platform, C#-only Ignite .NET 2.4

Searching for the Fix

We’ve got rid of C++ layer in Ignite 2.4, and replaced it with direct P/Invoke calls to JNI APIs. It was great - breaking the shackles and becoming free from C++, Visual Studio, and Windows. The build became much simpler and faster. No more embedded DLLs. But with the DLL we have lost the DLL_THREAD_DETACH. And what about Linux and macOS - there is no such thing there anyway?

To summarize, our task is: call DetachCurrentThread when a thread is about to exit.

This looked like a dead end to me for some time, but ThreadLocal turned out to be the right direction. Except that we had to use OS-specific thread locals instead of .NET native API.

Both APIs are very similar. destructor has a signature of void (*destructor)(void*). It is called only when a non-null value is stored in the corresponding storage, and that value is passed as the only argument.

This is perfect for us, just look at the signature: jint DetachCurrentThread(JavaVM *vm). We can store JavaVM pointer in the thread local storage, and pass DetachCurrentThread function pointer as a destructor directly, on any OS! The whole solution looks like this for Linux:

DllImports are different on macOS and Windows, but the logic is very similar. Actual Ignite code is in UnmanagedThread.cs and Jvm.cs.

Situations where you need a thread exit callback seem to be quite rare, at least in C# / .NET world. I’ve found only one StackOverflow question about this, and it is asked for a wrong reason anyway.

Interestingly enough, another distributed .NET database had a similar need: RavenDB. See this blog post by their CEO, Oren Eini: The design and implementation of a better ThreadLocal - I’ve left a comment there as well.

Since the problem of thread exit callback is quite generic and not specific to Ignite and JNI, I’ve created a NuGet package that encapsulates the solution: UnmanagedThreadUtils.